Chocolate
Smooth, creamy, sensuous
Be it dark, milk, white, bittersweet, liquid or solid…Most everyone has their favorite – be it wrapped around a caramel, drizzled over a bowl of ice cream, or in a steamy cup of hot chocolate on a cold wintry night.
Chocolate is a food that elicits an almost visceral response…and it brings back memories… of places and people we love. Brings thoughts of love and romance and desire.

So what is it about chocolate that gives it such mysterious power.
Chocolate contains around 300 chemical compounds that act as a mild stimulant, an anti-depressant, and even an aphrodisiac. The emotional lift, the increase in sexual desire and responsiveness and general “feel good” feeling that eating chocolate causes is a result of the increase in the serotonin levels in the brain.
Although it is not known for certain how long chocolate has been consumed by man, it dates at least as far back as the Mayas (circa 500 A.D) and perhaps back to the Olmec civilization, which preceded the Mayan. Back then, chocolate was far different from what we commonly think of as chocolate… It was a bitter tasting drink made from the ground beans and often containing chili pepper. It wasn’t until around the 17th century when the Spanish brought cacao back to Europe and the chili was replaced by sugar, that chocolate evolved into something similar to what we know as chocolate.
Chocolate comes from the cacao tree (Theobroma cacao) … a strange looking tree with large football shaped pods growing perpendicular to the trunk and branches. 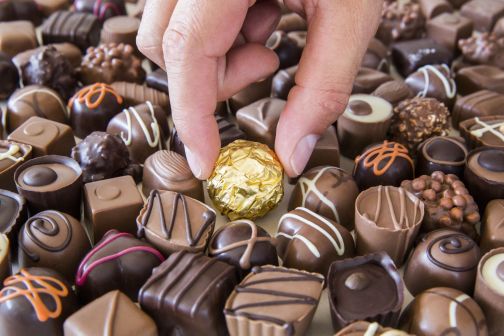 These pods vary in color from green, to yellow, to red, depending on their maturity. Once you strip off the rippled outer layer of the pod you discover inside there is a white fibrous pulp that has a mild bittersweet chocolate flavor and buried within this pulp are seeds that when processed become what most of us true chocolate addicts know as the “chocolate beans”. Depending on which of the three varieties of cacao tree you are harvesting the pod from, the beans within the pods are purple or white.
Without going too deeply into to the complex process and the many steps to produce what we know as chocolate, suffice it to say that the beans are roasted, the hard shells removed, then the remaining “nibs” are mashed. At this point sugar and vanilla are added to the chocolate liquor. After this the liquor is heated to evenly blend the liquid – then it undergoes the tempering process, and finally the chocolate is molded, cooled and hardened.
Most of us really don’t care about all the finer points of how chocolate is made. We care about TASTE. While there are many fine chocolatiers throughout the world, the most famous for their chocolate are the Swiss. In fact it was Swiss Chemist Henri Nestle, who first mixed powdered milk into chocolate to invent milk chocolate. So, depending on your personal preference be it for Hershey’s, Nestles, Ghiradelli, Godiva, Lindt/Lindor, Mars, Cadbury, etc…. Chocolate is a little bit of heaven.
And with Valentines Day just around the corner, jewelry, flowers, and chocolates are the items most often associated with this holiday that celebrates LOVE. So, whether it is a heart shaped box of assorted chocolates, chocolate truffles, chocolate covered strawberries or plain – chocolate is almost a must for Valentines Day – for both the men and women. Yes, for the men too. In case you missed it, they now make tool boxes, tools, footballs, etc in chocolate for the guys.
I personally like most any kind of chocolate, but that said, I must admit to having a preference for dark chocolate and a special weakness for Frango mints. They are made by a Chicago candy company by the name of Cupid Candies. My sister, who lives in Wisconsin, sends me a box nearly every Christmas and I hoard and ration them to make my meager supply last as long as possible. Originally, they were sold nearly exclusively by Marshall Field’s. In 2005, Marshall Field’s was purchased by Macy’s, and Frango mints may be purchased at Macy’s and they can also be found on Amazon. Thank the Lord !!! I don’t have a Macy’s locally, but with the internet, Macy’s and Amazon are as near as my computer and I can get my fix of Frango mints when I inevitably run out.
National Chocolate Day does in fact exist, while not the day after Valentine’s, Easter, or Holloween, please enjoy the great markdowns on chocolate. The official Chocolate Day is October 27, 2017. I also heard a news story on a major network report that scientists have determine that women require chocolate in our diets to level our hormones. If it fits in my calorie count, I refuse to feel guilty! 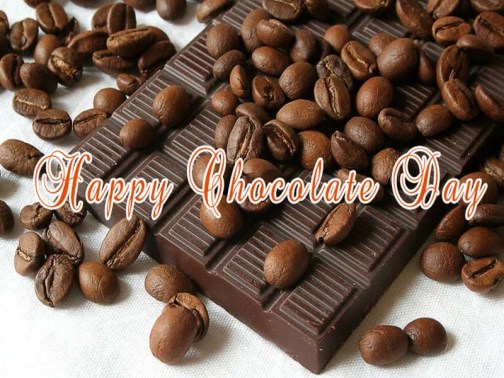 Jennifer lives happily in North Florida with her husband Scott and after a stroke and two brain surgeries her mom. While not blessed with children they dote on their four legged children four cats. I started writing after spinal surgery required second round of physical therapy to learn to walk yet again. While reading is a favorite hobby writing is something new with the launch of this blog and hopefully a fiction novel in the future.