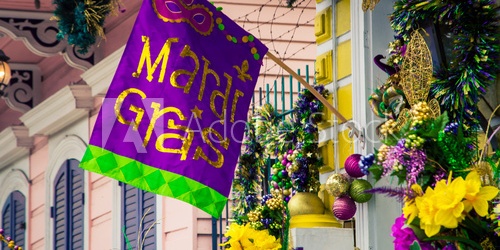 The last day of Carnival and the day before for Ash Wednesday, Fat Tuesday is the intertwining of a period festivals and feasts that lead to a time of fasting and reflection. Also known as Shrove Tuesday and Mardi Gras, this enduring celebration has many traditions and deep roots around the world.

Mardi Gras (French for Fat Tuesday) dates back to an ancient Roman festival honoring the deities Lupercalia and Saturnalia which took place in mid-February. When Christians arrived in Rome, they incorporated the festival into Lenten preparations.

For centuries, this solemn feast prepared Christians for the season of Lent and used up valuable meat and supplies they would be abstaining from in the days to come. Traditions surrounding the day have changed through the ages. Through time and culture, the practices of Lent and Carnival, Mardi Gras, and Shrove Tuesday have varied and become incorporated into regional customs.

In the United Kingdom, Shrove Tuesday is also known as Pancake Day. Pancakes are the perfect menu item when the future includes abstaining from fats, eggs, and sweets!  In Russia, they celebrate the entire week during Shrovetide as Pancake Week.

While the French didn’t originate the medieval feast, they did put their stamp on it. From parades to beignets and colorful masks, the last day of Carnival is full of elaborate costumes and lavish food sure to hold the revelers over through a long fast. During the 16th century, their ancestors celebrated Boeuf Gras (fatted calf) which included a tradition of parading a bull decorated with flowers through the city. The decorated animal is followed through the streets by a retinue of colorfully dressed attendants and bands playing unusual instruments. There was even a Boeuf Gras Society in Mobile, Alabama at one time.  (See history below for more information.)

New Orleans holds the crown for Carnival and Mardi Gras celebrations in the United States.  While the city is filled with French flavor and style, its culture is an eclectic infusion of many cultures. Colorful King Cake and thick, savory muffuletta sandwiches only suggest the indulgence possible on Fat Tuesday.  Regional specialties like Etouffee, Po’boys, and jambalaya all add to the atmosphere of the day.

And while we satisfy our cravings, let’s not forget our beverages. Signature creations from New Orleans hit the spot. Be sure to try the Sazerac made with absinthe or the citrus cocktail Arnaud’s Special. For a smooth drink with some punch mix up a Vieux Carré made with whiskey, cognac, and sweet vermouth. But you don’t have to have a cocktail to enjoy the feast! Fat Tuesday has plenty of beverages full of refreshing flavor. Coffees, sodas, and shakes of every flavor can be found.

Join in festivals around the country or have your own Fat Tuesday feast! Share your favorite traditions by using #FatTuesday, #MardiGras, #ShroveTuesday

In Pensacola as we are so close to both Mobile, AL and New Orleans, there are lots of pardades, parties, balls, and more. Get ready for beads, dancing, and King Cake.

At the end of the fun try coming home to my Crockpot New England Calm Chowder. As today this dish is celebrated nationwide today too.

The roots of the celebration have been woven together for centuries from medieval spring festivals and feasts that were based on the Christian calendar.  Fat Tuesday is celebrated around the world in its various forms all of which harken back to these roots of spring festivals and religious fasting in preparation for the Holy day of Easter.

Thanks to their establishment of Fort Louis de la Mobile, modern-day Mobile, Alabama lays claim to the first Mardi Gras celebration on American soil in 1703.